Through March and April 2019, including International Women’s Day on 8th March, Storiel in Bangor will be hosting ‘Women War and Peace’ – a moving exhibition by world renowned photo journalist Lee Karen Stow with the Welsh Centre for International Affairs (WCIA).

‘Women War and Peace’ explores the impact of war on the lives of women in Wales and across the world, through their personal portraits and stories – whilst also considering how women have inspired the search for peace in the 100 years since WW1 ended.

Lee’s portraits are accompanied by a unique document from WCIA’s archives in Wales’ Temple of Peace and Health, the ‘Women’s Petition to America’ of 1923. Signed by 390,296 women across Wales in the aftermath of WW1, and presented to US President Calvin Coolidge in Washington by 4 Welsh women – including one from Llanfairfechan – the petition to the women’s leagues of America called for the United States to join and lead the League of Nations, as a means of bringing an end to all war. Later, in 1926, over 2,000 women joined the North Wales Peace Pilgrimage from Penygroes, Caernarfonshire, to London’s Hyde Park, calling for ‘Law not War’ in the settlement of international disputes – calling for Britain to lead a European disarmament conference.

95 years later, these previoulsy hidden histories – uncovered by WCIA’s Heritage Lottery Funded ‘Wales for Peace’ project – has inspired a campaign led by Gwynedd women, ‘Heddwch Nain Mamgu’ – ‘Our Grandmothers’ Peace’ – to rekindle the vision of the generation who survived WW1,  for a world without war.

Among Lee Stow’s striking portraits, 97 year old Ifanwy Williams from Porthmadog is one of the founding members of Heddwch Nain/Mam-gu, and has been a lifelong peace campaigner with Cymdeithas y Cymod, the Fellowship of Reconciliation, founded at the outbreak of WW1.

As part of the exhibition, visitors to Storiel can play their own part in history by signing a new petition for a world without war, created by Heddwch Nain as a present day response to present to the United Nations in 2023-4 – 100 years after the original. Since its launch on International Womens Day 2018, it has already garnered 3,500 signatures.

EVENT: On Friday March 8th to celebrate International Women’s Day and to launch the exhibition ‘Women, War & Peace’, join us at 12.30pm at a free lunchtime lecture by

‘The struggle for female suffrage was fought by Suffragettes and Suffragists. They used different methods to promote their messages and in Bangor the Suffragists were the most active. They were an extraordinary group of principled women who were highly organised and effective.  The story of the Suffragists has been overshadowed by the tactics of the Suffragettes that caught the news headlines but both groups need to recognised for their contribution in gaining votes for women.’

A choir will assemble to sing the ‘Pankhurst Anthem’ at 1.40pm 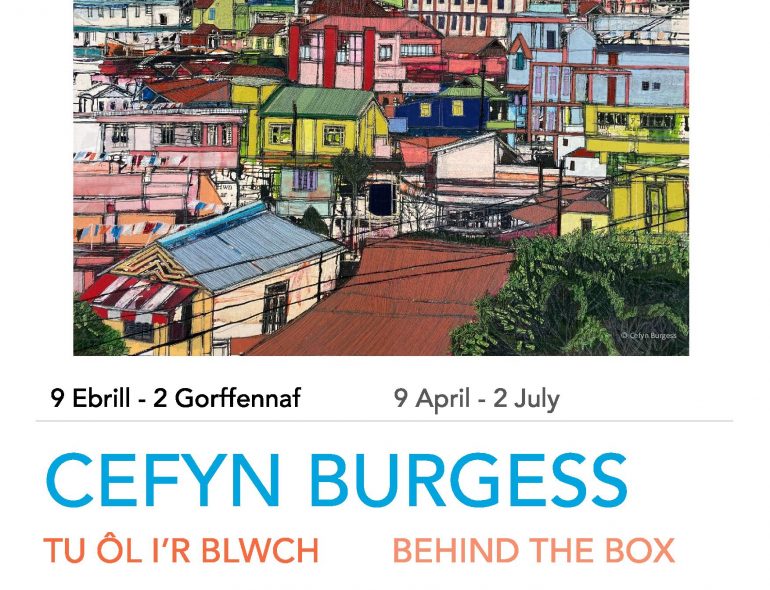 Contemporary townscapes in stitch, print and textile of the Hills of Khasi. A new collection of work following study visits to the region. Part of an ongoing project to discover the connections between the people of Wales and the Khasi and Mizo people of north east India. Supported by Welsh Arts International, RICE and the Presbyterian Church in Wales. Also exhibition banners by the Khasi-Cymru Collective.